I think I should start out this post by saying this soup recipe isn’t an ordinary soup recipe. It is an award winning soup recipe! My family first enjoyed this Cheesy Ham and Potato Chowder at a 4-H banquet “Soup Cook-off” many years ago.

This was the contest submission of another county 4-H club and it was everyone’s clear winner that day, taking home the award for “Judge’s Choice” as well as “People’s Choice”. In true Midwestern fashion, they were happy to share the recipe with anyone who came over saying “I have to have that recipe. Will you send it to me?”

This creamy (and cheesy) chowder is full of diced ham, tender cooked potatoes, and an assembly of other veggies.

It’s hearty and filling. Perfect for a cold winter day.

My family is usually quite predictable when it comes to our holiday meals. We have ham at Easter, turkey at Thanksgiving, and delicious grilled filet mignon for Christmas Eve.

But for Christmas Day, instead of a big orchestrated meal, we go a bit more relaxed. Opting for lounging most of the day in our new Christmas pajamas, playing games, opening gifts, and just spending quality time together.

Since there is minimal fuss, I usually turn to my arsenal of soups perfect to be made or heated in a crockpot. This one definitely fits that criteria.

I love to make this soup a day or two in advance. (Since the recipe’s only downfall is it does dirty a dish or two).

Then on Christmas Day, we fill a slow cooker full of this soup and reheat for a couple hours.

Thankfully, this Cheesy Ham and Potato Chowder makes a large batch, because everyone is going to want a second bowl! 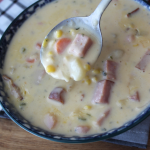 If you’ve watched any Hallmark movies you know t

Back in October my best friend and I took our moms

We are expecting our first hard freeze of the year

In case anyone needed a little Thursday pick-me-up

If you have been following along with me on Instag

It’s football season y’all! 🏈 One of the r