I blame it on Prince William and Kate. Ever since their wedding over a decade ago, I’ve had fun following along with the British Royal Family. The good, the bad, and everything in between. It’s a guilty pleasure of mine. When Queen Elizabeth II passed away last week, I felt the loss of a woman who showed the world how to serve with dignity and grace, while also trying to put family first. In honor of the Queen, this past weekend I made this warm, and comforting British Cottage Pie Recipe.

Now you may be wondering cottage pie? These pictures look like shepherd’s pie.

Slow-cooked ground meat in a gravy sauce topped with mashed potatoes and baked.

Since, there are no sheep to be found on my family’s farm, cottage pie it is.

The ground beef is cooked with onions in a skillet. Then with the addition of a few simple ingredients, it is transformed into a rich thick gravy that gets ladled into the bottom of a baking dish.

While the beef gravy is simmering away, make the mashed potatoes. Dollop over the gravy. Top with shredded cheddar cheese, and bake until golden brown and delicious.

Serve this warm, comforting meat and potato dish with your favorite vegetable and your family is sure to crown you King or Queen of the kitchen. 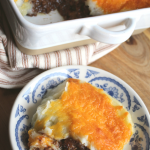 Did you make this recipe?

We are expecting a big snow storm through these pa

It’s that time of year… Seed starting! You kn

I’ve been a fan of Fr. Mike Schmitz and his podc

Eucalyptus- I’ve wanted to grow it in my flower

I don’t know about you, but after the holidays a

Can’t let 2022 go out without sharing the Top Re

Every year when we get to the week of Thanksgiving

“For everything there is a season.” One of my

Our worlds are crazy busy. Kids are back in scho

It’s feeling a bit more like fall around here an

Around these parts school started this week, and i

My best friend, Bree, is pregnant and expecting he