With Memorial Day this past weekend, we can now say we have reached the (unofficial) start of summer! Summer brings a lot of things. Vacations, baseball games, and days by the pool. Although I would say, if you are one of us who also raises cattle, it probably means haying season. Which can certainly make you in need of a delicious thirst-quenching drink like this recipe for Anne Shirley’s Raspberry Cordial.

What I love most about summer is it’s a wonderful time to read a New York Times Bestseller or a classic that has been collecting dust on your bookshelf. One of my favorites that I read time and again is the Anne of Green Gables series.

I may regret admitting this, but one of my favorite scenes is where Anne invites Diana over for a tea party and inadvertently gets her friend drunk on wine when she thought she was serving her a few glasses of raspberry cordial.

Excerpt from Anne of Green Gables

“Set Diana drunk!” she said when she found her voice. “Anne are you or Mrs. Barry crazy? What on earth did you give her?”

“Not a thing but raspberry cordial,” sobbed Anne. “I never thought raspberry cordial would set people drunk, Marilla—not even if they drank three big tumblerfuls as Diana did. Oh, it sounds so—so—like Mrs. Thomas’s husband! But I didn’t mean to set her drunk.”

“Drunk fiddlesticks!” said Marilla, marching to the sitting room pantry. There on the shelf was a bottle which she at once recognized as one containing some of her three-year-old homemade currant wine for which she was celebrated in Avonlea, although certain of the stricter sort, Mrs. Barry among them, disapproved strongly of it. And at the same time Marilla recollected that she had put the bottle of raspberry cordial down in the cellar instead of in the pantry as she had told Anne.

Well, this recipe can’t be confused with Marilla’s famous homemade currant wine, but it certainly is a good base to add some “fixin’s” and make it your own.

Don’t get me wrong. It is certainly delicious, just how it is.

Add some more lemon juice and sugar for a spin on a delicious raspberry-lemonade.

Add some lemon-lime soda and make it a fizzy spritzer.

If you are feeling like making a great summer cocktail, add in a splash of vodka or champagne to bring a little life to the party.

Any way you pour it, this perfect summer drink will have everyone sipping on some good times. 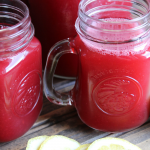 Anne Shirley's Raspberry Cordial recipe is the perfect, easy summer drink. Don't worry, unlike Diana Barry, you won't be getting tipsy off this thirst-quencher.

Did you make this recipe?

Every year when we get to the week of Thanksgiving

“For everything there is a season.” One of my

Our worlds are crazy busy. Kids are back in scho

It’s feeling a bit more like fall around here an

Around these parts school started this week, and i

My best friend, Bree, is pregnant and expecting he

With Easter just around the corner I thought it wo

I’m incredibly blessed that in my job I have the

Anyone else out there love a good Butter Braid fun

Buy yourself the flowers. Light the ‘good’ ca

The Super Bowl is this weekend so why not make SOU